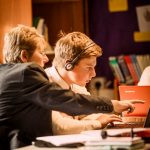 Use of Assistive Technology in the Classroom

Nearly 20 years ago I was introduced to a software package which would write as you speak, and I was amazed. It was called Dragon dictate. A dyslexic employee at GCHQ visited the school I was working at and demonstrated it to me. It had been provided for him at work. It has come a very long way since then and is now super easy to use, especially for our children.

This is my special interest; Dragon Naturally Speaking (premium or professional). I love teaching children how to speak to their computers enabling them to write.

This is an area where I am proud to say, we have had a lot of success at Bredon.

I passionately believe that if I can eliminate the difficulties of writing and spelling, a child with knowledge is free to express everything that is in their head.

Last week was one of those where I really knew why I love my work at Bredon! I spent time with a Year 10 pupil, who was not new to Dragon, but had agreed to have another go at it after a long break. So, with help, he completed the very short training paragraph and went on to be able to recite a sentence with 100% accuracy and all before the bell went for the end of class. His face was a picture! An independent sentence that looked like a Year 10’s work, not that of a Year 4. This was a first for him. He previously thought he would never be able to do it because his speech was different. Even with different speech patterns children can succeed. Although this seems a very small step to us, it is a huge achievement for him.

He now has the confidence to want to continue with it and I know he will succeed and become a more independent learner as a result.

I have also got two more young people working with Dragon in the same way this week. A Year 7 and a Year 9. Both quite articulate individuals locked inside the most basic explanations and simple sentences, only worthy of a junior school aged pupil, because of lack of confidence with spelling and handwriting. With only three sessions learning the commands of Dragon, these boys are able to go into the classroom and answer numbered questions, put in tables and write vastly more detail in the time allotted than they were able to previously. Yes, there will be some errors, yes there will be some need to do further training, but they are up and running in a short space of time and so is their self-esteem.

I get referrals from TAs, class teachers, tutors, boarding staff and sometimes parents too. In the first instance, I arrange to go into class to see how the child functions and what their needs are. I look at the tasks being issued and resources provided. I consider how the child approached the task and what success they had and what use they made of the resources that were already available. I then arrange to withdraw the pupil for a one to one chat about how they feel about their learning. After this I generally have a picture of what kind of help the child would benefit from.

If the child can formulate good sentences or short phrases and knows what they want to say, but is unable to write it because of poor spelling, difficulties with fine motor control, and/or physical discomfort using a pen, I would suggest Dragon to speak in their work. So, we try Dragon out on either my laptop or a school computer to see if they like it and if they are suited to it, then I recommend to parents that a lap top with Dragon Naturally Speaking and Microsoft Office would help. Once the child has a lap top with the software, I schedule them in for several lessons 1:1 to learn how to use it, then I go into class (usually something like English/history/science) to help them integrate it into the lessons. Once the child is confident, I move on to the next pupil.

I do not advocate Dragon for all though, it is not a solution for everyone. In these cases, I look for alternatives that suit the pupil better.

Write Online with it’s Wordbars and structured ‘Frames’ might help. Once again, I will suggest to parents and teachers what might help. Sometimes it is not specialist software, it might be something downloadable from the web such as a planner with reminders or perhaps Grammarly, which is a fantastic tool that you might even like to use for yourself at home. I use it for email all the time.

Sometimes children need help using Office applications to speed up work in class and produce work of a higher standard. Tools like SmartArt in Microsoft Word, to present information and tables and using the thesaurus to improve writing, all add to the finished product. These things often get missed.

It’s my mission to give children pride in their work and enable them to produce written passages worthy of the knowledge that they often have trapped in their heads. Many of our children can hold an intelligent conversation with an adult, yet what they write on the page is similar to what one of their younger siblings might produce. How soul destroying is that?

because even a dyslexic can communicate on a level playing field just the same as everyone else. They might be using their phone, iPad, or tablet as well as their work place computer and voice-activated technology is everywhere; the only place they stand out now, is in the classroom. Unless we change that.

At Bredon we make every effort to bring technology into the classroom. It is not just for supporting special needs, it is a tool for the able pupil to make work more efficient and rewarding.

As well as a plethora of teaching software in the Access Centre, we are privileged enough to have three superb packages to support our Dyslexic learners across the school. Read and Write Gold (A reading, writing and editing package), Write Online (Word bar support and prediction, soon to become Docs Plus) and Dragon NaturallySpeaking (voice recognition software).

The three packages allow pupils to read, write and edit work from junior age right through to Sixth Form, when they leave and continue to University or the world of work. (Some of these support packages can also be used in exam situations, providing the pupil has an entitlement to a reader and/or scribe and it’s the pupil’s usual way of working in the classroom.)

We also use C-pen Readers in the classroom at the desk, for reading text in books, giving pupils independence to read just the occasional word or longer passages as they please, without needing a computer at all or human help.

This term we have introduced nine Samsung tablets which we hope will inspire reluctant writers, in addition to offering an alternative way to submit work using photographic evidence in classes across the curriculum and for specialist teachers to use with spelling apps and games.

In the 2017 Autumn Term we began a new initiative to teach the use of Read and Write through the IT curriculum at Year 7, so everyone will know how to use it.

This is also backed up by our learning support staff in the Access Centre when they carry out withdrawal lessons and small group work. The teaching staff also reinforce its usefulness each lesson by asking all pupils to load this programme at the start of the session. That way it removes the stigma of only certain children using software to help.

I begin working with pupils as early as Year 6 so that when they arrive in Year 7 they have lap tops with the software they need to be able to access work in the classroom. Mrs Britten in Science teaches a lesson in Year 7 on how to draw scientific diagrams using the computer. Children love this and really enjoy putting the knowledge into practise. All they need is a few clips of equipment and they are away. They are so proud of what they can produce, as are our pupils with dyspraxia producing diagrams, which can often be so difficult and tedious to try to draw.

If pupils use Read and Write they can even make audio files from the written text given to them by the teachers. It’s a simple click of a button and they have an audio file to listen to on their gadgets on the bus on the way home. Independent learning.

BUT, some children choose not to use the technology at all, preferring to type or write as best they can, or to rely on a teaching assistant to help prompt and order their thoughts. Technology is not the answer for every pupil, some children do not like technology. For some it just adds another layer of confusion and frustration and for these children it will not succeed. It will only be successful for those who have an interest in using the computer and are willing and able to accept the help it can offer; the ones I can inspire with little visions of their own success.

Every child must learn to read and write if they are to gain an education. True or false?

I know many people consider it essential to read and write for oneself, but for some it just is not possible in the conventional way. But if your unique learning style is invisible and means you don’t thrive when you’re are asked to read or write in the conventional way next to your peers, then the resulting feelings of demoralisation and failure can be crushing.

I firmly believe using today’s technology; with specialised software or not, it inspires confidence, enthusiasm and develops a stronger character. These are all tools for independence.

Louise Wood began her teaching career with the Open University pilot program in her spare time when her own children began school many years ago. The program was the first training for Teaching Assistants. After qualifying as a TA, Lou continued her studies with the OU while working in various roles in both junior and senior mainstream schools. Lou came to Bredon in 2004 to set up the IT in the Access Centre and to train staff to use it. Lou now works as an Assistive Technology advisor / SEN Teacher. Adv. Dip Ed SEN OU still within the Access Centre and across the school.