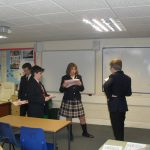 Shakespeare week has arrived at exactly the right time for Years 7, 8 and 9 since it has come just as the English department are finishing off our units of work about his life, times and his plays. All our English groups are using a range of Shakespeare plays not only to look at language, but also make his characters come to life in a range of stimulating and enjoyable work. 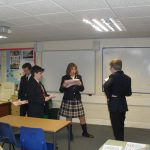 Mrs Boakes’s Year 7 and 8 have been researching 6 of Shakespeare’s plays and making bookmarks containing information (such as when they were written, performed and a brief synopis of the storyline). They are learning to reference their sources, using Harvard referencing, in preparation for KS4 and continuing with the study of the structure of sonnets and iambic pentameter.

Year 7 are re-enacting a modern version of “Romeo and Juliet”, to give them a deeper understanding of the plot.

Year 8 are performing a Shakespeare rap, designed to ensure they fully understand the background to Shakespeare’s life.  They are also preparing a response to “A Midsummer Night’s Dream” as well as “Romeo and Juliet”.

Year 9 have already studied “Much Ado About Nothing”, written a response and completed a quiz about it. 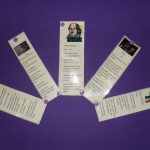 Is Richard III the terrible villain Shakespeare made him out to be? Mr Jones has all the answers with his Year 9 class.

To be or not to be? The answer can also be found with Miss Uren, Mr Chance and Mr Milton‘s classes who have all used Hamlet as the basis of their work with Year 7 to Year 9.

Good luck to James Harrison and Seb Reed Daunter who are putting their finishes on their model of the Globe Theatre. Let’s hope it doesn’t come to a fiery end like the original! 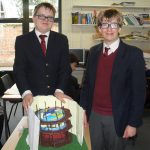 As you can see there’s a whole lot of Shakey going on !