On the 25th January we held our very first Burns Supper and Ceilidh for our Sixth Form pupils. Because of COVID restrictions, it is the first formal event that we have managed to hold for the current Sixth Form and for many it was their very first Burns Night experience.

Bredon School partnered with our local Riding for the Disabled Association (RDA) clothes shop, in order to provide the opportunity for our pupils to wear preloved designer clothes to the event, whilst providing a local charity with our support. This black tie event allowed everybody to get dressed in their finest. There were some impressive dinner jackets, some amazing dresses and lovely flashes of tartan to accessorise. 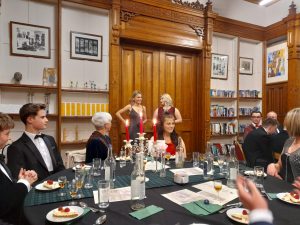 The event was held in the fantastic traditional Bredon School venue of the Old Library; where a menu of Cullen Skink, haggis neeps and tatties, and venison sausages, followed by cranachan cheesecake. All supported by lashing of Scotland’s National drink ‘Irn-Bru’ which was all created and cooked by our outstanding in-house catering team. Some pupils had tried haggis before, but most pupils had never even seen it before. I was so impressed by how everyone tried it, with many pupils declaring how much they loved the taste of it! I meret it’s success to the fact we managed to secure the tastier left handed haggis from the north east of Scotland, which clearly made a difference.

As is traditional at Burns Suppers there were recitals of some of Burns’ poetry. Led by our headmaster Mr Oldham giving the ‘Selkirk grace’. Then Jarrett housemaster and staunch Scot, Mr Cradock having the high honour of ‘addressing the haggis’ as well as acting as MC for the night. Mrs Adams, the head of Sixth Form, delivered a speech on the history of Burns and his life in the ‘Immortal memory’. A witty and well rehearsed ‘toast to the lasses’ was proposed by our head boy Mitchell B-S, a speech which was enjoyed by all. The ‘reply from the lassies’ was led by head of school Eloise B, with support from sports prefect Nell L. 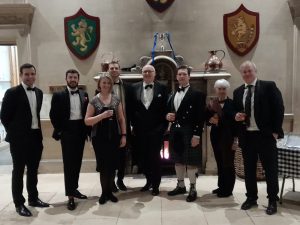 After the dinner and speeches, we moved through to the Pull Court hall and in the glow of the roaring fire in the fireplace; the students were introduced to ceilidh dancing, with live music from Pete Hartley on the fiddle, both ‘The Gay Gordon’s’ and an ‘Orcadian Strip the Willow’ were attempted. Somewhere amongst the chaos and tangle of limbs, some semblance of the dances emerged. The fact that everyone attempted it for the first time and were able to dance with a partner made it incredibly successful. The laughter and merriment and making up of dances made this a fantastic part of the night

Thank you very much to the tutors for all of the help and advice given to their tutees in the lead up, as well as attending and supporting them on the night. Most of all congratulations to our Sixth Form pupils who attended looking magnificent and tried many new culinary delights.We are already making plans for our Burns Night next year and we will be coming back even bigger and better for next year, we can’t wait!